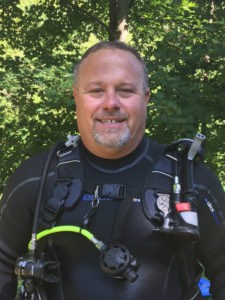 Jeff “The Gucci” warm water Instructor started his adventure in diving in 1981 and completed his Advanced Open Water in 1982. Lucky enough to travel with his parents he had the opportunity to explore most of the Caribbean Islands below sea level. In 1992, he took his Rescue diver course with Divers Den and on to Dive Master in 1995. In the mix of dive training, He also took to the sky.
In 1988 Jeff received his private pilot’s license with just 41 hours of training. At 250 hrs. he received his multiengine instrument rating.  Jeff continued to train and received his Airline Transport Rating and in 2005 He received his Commercial Helicopter Rating. In 2009 his flying and diving were put on hold as he had to make another accomplishment, Jeff became a Cancer survivor after over 9-1/2 hours of surgery and 4 months of Chemo and 30 days of Radiation. In 1999 Jeff funded a new adventure and with Chaz and “Underwater Educators Inc.” trading as “Divers Den” was born. In 2015, it was time to take on a new challenge that has forever changed his life.  Jeff insisted he wanted to be an “Instructor”. Jeff received his PADI Master Scuba Dive Trainer rating that year. In 2016 Jeff received his Handicap Scuba Diver Instructor rating.  In 2017 Jeff received his SDI/TDI Instructor Trainer rating. One of Jeff’s biggest loves of diving is changing people’s lives by teaching them to dive. He is also an underwater photographer who has had the opportunity to go around the world on liveaboards and resort diving.

As of 2019, Jeff was selected to be an SDI instructor trainer Ambassador a title held by only 25 people worldwide!

check out his page on SDI's website by clicking below 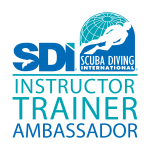